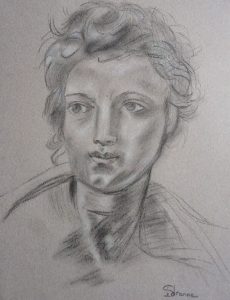 Côme crosses paths again with infected people on his way home. He has been recently working in Piero di Cosimo’s painting studio and the way to his parents’ house is long and risky. He walks along the docks and under bridges he meets all the world’s misery dealing with its gaiters and its pustules. He deeply wonders whether he should take a break while the epidemic fades. Thinking back, he should have become a tailor, a family tradition.It’s raining again. Côme walks faster. He sees rats in the distance, running in a messy way. Some collapse on the side, others seek to escape their destiny. Life is no easier on the rodents’ side. A beggar, to whom usually Côme willingly gives a piece of bread, is dying on the floor. A chill goes down his spine.

He finally joines the familiar and welcoming neighborhood of his childhood. The door of his house is wide open. It’s wierd. As he is about to cross the threshold, he is pushed by one of his brothers rushing out of the walls. Instinct, probably, catches the young man by the arm, holding it strongly. Interrogated by the young artist, he screams, more than he speaks. However, Côme manages to understand that their mother has the first symptoms of the disease, namely muscular pain and unbearable headaches. Their dog dropped dead two days ago. Always dragging his carcass near the sewers, it got contaminated by the fleas of a rat and then infected his favorite mistress.

Côme thinks in a flash and decides to see their family doctor. At the scene … an amazing crowd on the sidewalk. No way he could wait. So he goes back home, empty-handed. The house seems so calm. In other circumstances, he would have shared a hot drink with his parents and talked about his work. He holds his mother in his arms, trying to ease her agony. The lymph nodes, sore, take a bright red color. The bites of the flea should be seen now. But why bother, it’s far too late, much too late. Septicaemia will settle down and death will end the process.