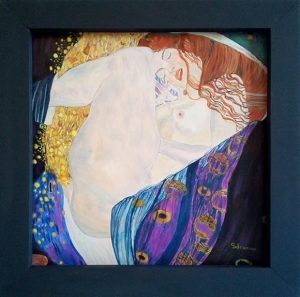 One morning, Acrisios, king of Argos, feeling desperate because he had no son, goes to Delphi to question the Gods if, by any chance, he could be the father of a male. Unfortunately, the priestess tells him that not only would his wishes not be fulfilled but his only daughter, Danae, would give birth to a son who would later kill him. And the only way to escape from that spell was to kill his own daughter himself.

Acrisios refuses to do so, fearing even more the anger of the gods when family blood is shed. So he decides to lock her in an open-air brazen tower to let the air and the light penetrate.

One day, an unusual event takes place. Falling from the sky, a shower of gold fills her bedroom. And so Danae becomes pregnant and carries the child of Zeus. Perseus is born secretly. But soon Acrisios notices the little boy. Upset, the king tries again to kill his offspring. He builts a large wooden chest, dropped off by a boat.

Danae and her son Perseus drift in the middle of the ocean, for several days. Their wierd journey ends on the beach of a small island. They are rescued by a fisherman Dictys. Hosted by the good man and his wife, the mother and the child live happy days.

But one day, Polydecte, king and brother of Dictys, becomes acquainted with Danae and her son and falls deeply in love with her. He wants to marry her and get rid of Perseus. The young man having no presents for the future wedding, on the advice of the king, promises to kill Medusa, a gorgon (monstrous creature) and bring back her head.

Perseus sets out to find her. On his way filled with challenges, he meets Hermes and Athena, who will be of great help to him to obtain from the Greas the way to reach the nymphs of the north, to have a sword with the solid blade against the scales of the jellyfish , to use his bronze polished shield like a mirror to attack the gorgon and thus to avoid its mortal power to instantly turn into stone at the slightest glance. With winged sandals, a magic satchel and an invisible hat, Perseus succeeds in his quest. He finds King Polydectus and his subjects at the palace and changes them into stone.

He releases Danae, his mother.