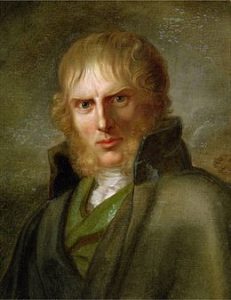 Caspar David Friedrich (September 5, 1774 – May 7, 1840) is a German painter and draftsman, considered the most significant and influential of the nineteenth-century German romantic painting.

His childhood is tragic and will determine the two main themes covered in his painting, namely death and nature. Indeed, in ten years, his mother, this wo sisters and a brother died.

At the age of 20, he attends the Royal Danish Academy of Fine Arts in Copenhagen.

In 1798, he moves to Dresden. Puzzled by Schleiermacher’s point, Friedrich sees the approach of religious feeling in the contemplation of nature. And thanks to Goethe, he integrates the color into additional symbolism.

In 1810 he is appointed a member of the Berlin Academy. He exhibites in Berlin, is admired by Goethe and Frederick William III of Prussia buys him a painting: Morgen im Riesengebirge. Following the Napoleonic invasions, Friedrich paints patriotic subjects. He refuses to go to Rome.

Friedrich fells ill in 1824. His condition gets worse in 1826, and he suffers from a delusion of persecution that keeps him away from many of his friends. During this period, he doesn’t paint much, but in 1827 he returns to oil painting.

In 1834, during the visit of Friedrich’s studio, the sculptor David d’Angers defined the painter’s work as follows:

“This man has discovered the tragedy of the landscape. ”