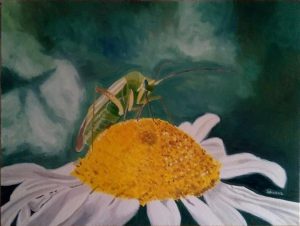 Arabelle is delighted. She passed all her final exams. She will finally be able to enter the Air Force as a pilot and explore new lands. Her dream of a wise child has finally come true.

In only a few years, the frail little beast, mad insect, knitting in the paws of her mother, knew how to pull out of the game and fight up to the end to get her chance in the sun. A career well coveted and so unreachable to girls. But she gave herself entirely, and now, that blessed day has arrived.

Tomorrow morning, at dawn, Arabelle will take off for the very first time for a very real reconnaissance mission and not a lab simulation! She did not sleep much, she falters a little bit. The fresh air of dawn and the winter season brings her back for now. She is ready. She waits for the signal given by the chief captain of the Novice Brigade before unfolding her feverish wings.

In just a few minutes, she reached the sky, passed the atmosphere and moved into the afterlife. She glances right, left, in front, behind. She is in search of something. What? She does not really know exactly. But she is certain that she will know it when the time comes. This long awaited moment of the ultimate discovery. She activates herself. She knows full well that her oxygen reserves are not eternal.

Suddenly, just after an umpteenth round, she sees it. It is there, radiant, alive. All around, the universe is a sparkling blue, almost magical blue. Arabelle approaches slowly so as not to frighten it. She arises with much meticulousness and delicacy. Her six paws barely scratch the yellow and sparkling heart of the bowels of the new planet. The immaculate white edges bend under her weight. Arabelle explores the scene, recording the smallest detail thanks to her trained and expert antennas. Another few more seconds before going back home and reporting.

On her way back, Arabelle feels particularly light. She is proud of her discovery. How lucky ! And for her very first outing! She lands with as much agility as possible and worthily defers to her superior everything she saw, felt, recorded in her brand new brain, on the planet Daisy!