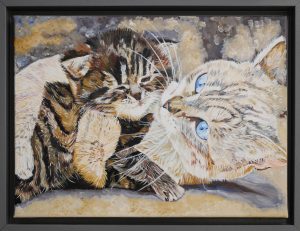 It’s freezing to death in the kitchens in winter. Éos tries to get closer to the gas stove which has been running for a few minutes. A dish in the oven, for dinner, presumably given the late hour. It is pitch black, in the basement of the Château de Valençay.

With her huge belly, Eos finds it increasingly difficult to make her way discreetly and quickly among the castle staff. The rooms are now out of her reach. She only has this place left where finally she can almost easily get some food. She doesn’t know how many cubs she broods inside but she is starving.

Damn, she just got spotted. And besides, by the Chef … The loud hooves stride towards Eos and in no time she is lifted off the ground. To her surprise, she found herself wedged between the cook’s neck and shoulder. She’s not used to so much heat, Eos is overjoyed. She would almost fall asleep in that little hollow that smells like cinnamon and apple. In fact, she fell asleep.

When Eos wakes up, a sharp pain in her stomach prevents her from coming out of … But where is she? In a box… Rolled up in a blanket, so soft… The pain is too sharp to ask herself more questions. The contractions followed, Eos would almost suffocate. Suddenly, a small head, a very frail body, here is one … Then, nothing more, the contractions disappeared, the pain with it. This time, that’s the way it’s going to be. A tiny little kitten. Éos is delighted. Eyes closed, blindly he walks awkwardly towards his mother’s belly and begins to suck vigorously.

It was then that her human guardian angel entered the doorway of the mysterious place in which Eos rests. A light snack awaits her, soft petting and whispered words out of her understanding. She might just get used to her new life. No more dangerous and hazardous trips in the woods, no more fights between congeners, no more futile searches for food.

When Eos comes to her senses, she is no longer in the box but in the crook of the cook’s neck, with her baby whom she decides to name Ruby, her jewel!