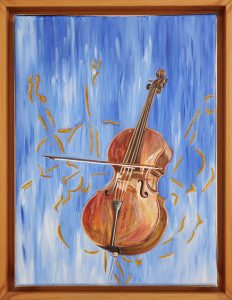 Tonight, it’s the big night. The long-awaited one since his earliest childhood. He is standing behind the scenes, waiting to finally make his entrance. He recalls some sweet and bitter memories.

He was only 5 years old when he entered the earthly cello paradise. This passion has never left him and never will. It’s hours and hours of training, pain too, but so much joy. Sometimes sharing with his music classmates. His youth flows both laboriously and peacefully.

In the summer, he attends music study camps. He’s having a blast. He also makes encounters that will turn his future life upside down and open the doors of the universe. He learns a lot that summer. The technique intensifies. He is no longer a child. The teenager works more intensely, more passionately, more methodically. His family, mostly musicians, strongly encourage him. He feels supported, understood. He feels himself growing wings.

It wasn’t long before the performance prices rained down. But he keeps a cool head. He is not yet where he dreams of being one day. He comes close, he can feel it, he wants it so badly. To continue on the arduous road of learning, he must cross borders to benefit from the best. The standards are certainly there, but excellence will not come by itself. If he wants it to be part of his daily life, he must undoubtedly give himself the means.

The fun is there. He lives, vibrates, sweats the harsh and melancholy notes of the cello. The most beautiful instrument in earth. Closest to human DNA. He doesn’t forget anything, he stacks up. He misses his family terribly, but without this sacrifice the peaks fade from the horizon. He is just 18 years old, the bright future is just inches away. A fabulous talent, an infectious energy, an extreme concentration, an endless learning, a tasty mixture which is now an integral part of his personality. He simply is.

Tonight, it’s the big night. The long-awaited one since his earliest childhood. He is standing behind the scenes, waiting to finally make his entrance. He recalls some sweet and bitter memories. Tonight, on stage, in front of an acquired audience, in front of his family, his friends, his anonymous croud who praise him, he will reveal himself. It’s his. He walks, applaused. That’s who he is Luka!