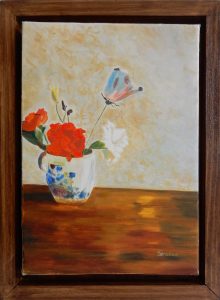 That night, Elsa wakes up suddenly. She glances at the clock. Four in the morning … But what’s the matter with her? It’s the third time this week. Last week as well. But exhausted, she always falls asleep again in seconds, without remembering. Today, it’s different. She has already slept over five hours, almost a full night, at least an ordinary night for her. All of a sudden, a slight noise catches her attention. Where does it come from ? Her wandering thoughts cease instantly to give place to extreme concentration. It comes from just above her head. Or rather slightly on the right, in the corner of the ceiling, the one that separates her bedroom from the bathroom. It sounds like footsteps, discreet but also irregular.Curiosity prevails over recklessness, Elsa jumps out of bed, puts her slippers on, a jumper and doesn’t forget the electric lamp on her bedside table. No doubt, if it’s up there, she wants to settle the matter once and for all. Damn, she has to take the ladder out of the shed. The roofs aren’t arranged yet, and she only had to climb up there two or three times. And the first time was the day of her first visit of the house. A true crush but … that’s another story!

Somehow, Elsa reaches the half-shaky window that leads to the loft. Once thick, glass wool covers the ground. She gets up too quickly and bangs her head on a beam, far too low. As a quiet lead-in, she could have made an effort. And yet, with the ray of light directed toward the spot identified a few minutes earlier from her room, she notices an elf, a mug in his hand, and some marigolds poetically arranged in it. In the dark corner, a small board serving as a table and two smaller ones, certainly for chairs. As she listens, Elsa hears a little music, piano. Oh no, Chopin, she’s pretty sure of it! And … another goblin, wearing an evening dress. Elsa rubs her eyes. It can’t be true, she’s in a middle of a dream!

The couple goes to her, a beaming smile lights up their faces, they offer their hand.