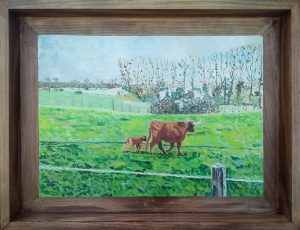 Betty left her native Scotland, a small town called Callander, not far from Stirling. It is as cold in winter as it can be hot in summer. The rhododendrons standing next to roadsides and paths are gorgeous. One early spring morning, a huge truck stopped in the yard. Because she is young, she didn’t panic. She was just puzzled by the panic that had seized the old ones. Screeching mooing, screams of pain. All this seemed a bit too much to her. And then, she received a stroke on her sides ordering her to move towards the gaping opening of the engine.

Hours, even days. A choking heat, an overcrowded promiscuity, an overwhelming thirst, an invading hunger; in short, an unbearable suffering. And then, a ray of sunshine, a light breeze, an opening of heavy doors, a green meadow and other congeners. Betty’s journey ends up in France, in a small village, even smaller than hers, in the Berry.

She steps out of the truck like a devil from his box. She can’t wait to stretch her legs. Suddenly, she feels like caught in a trap. Indeed, the herd has approached and surrounds her now. Obviously, no excessive aggression. Just pure curiosity. A male, not much taller than her steps forward her one, two, then three steps. He is very close to her now. His muzzle in the air, he breathes, sniffs the smells from over there. She leans her head to the side. They will never leave each other.

Weeks, months, years have passed. Life is peaceful on this side of the border. She’s sweeter too. No snow, no cold weather. Food at will, getaways whenever a piece of fence lets them free, « joie de vivre » each day. Of course, friends disappeared as if by magic. In fact, they were taken in a truck identical to Betty’s and never returned.

Then, on a spring night, Betty gave birth to her first calf. She is thrilled. It’s her very first new born. It’s a boy ! He follows her everywhere.

Some noise in the cellar