Some noise in the cellar 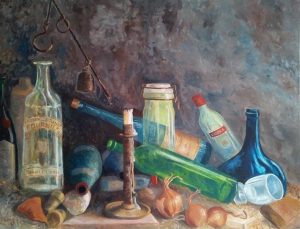 Marion has just unpacked her last box. Another move but this time it’s for good! She fell in love with this little house in a small village in central France. Tomorrow night, her best friends will join her for the weekend and give her a hand for the garden. She has always lived in a town and in a flat, so managing a lawnmower is a real challenge for her.

And what if she had a drink to celebrate. The box with all the bottles of alcohol has certainly been put in the cellar because she can’t get her hands on it. She has already opened all the cupboards in the kitchen. Nothing, nada! The cellar, the cellar. Okay but where are the keys? The owner gave her a keychain when she arrived without giving any explanations and the movers, three really sweet guys. A little quiet, obviously, but so efficient and polite. In short, they managed without having to ask her anything. She should be fine.

She gets out of the house and goes to the cellar. In fact, it is called a « wolf’s ass ». Well, that’s what they call this mound of dug earth in which you enter by a locked door and which becomes a cellar.

While Marion tries one by one each key of the keychain, her ear is attracted by a noise. It was like a rub, and then footsteps. No, it wouldn’t come from the cellar … Terrified, she turns back and rushes inside the house, dropping the keys on the wet grass. Out of breath, she tries to pull herself together and dials the phone number of her best friend. But she comes around and hangs up before the connection. No, not the first night, not already. She still remembers the reaction of all her relatives when she announced her coming in this lost hole. They would be much too happy to see her back on the ground.

She decides to go back with an electric lamp and a stick, just in case. And ten minutes later, the door gives way and Marion enters by lighting the small room. This noise again … A kitten approaches cautiously meowing …