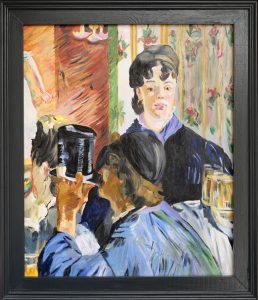 Like every Friday evening, William leaves the office with a few colleagues, like him, single, free, happy that the week is finally over.

The merry gang heads up to the Lipp Brewery, their headquarter for a few years now. They particularly appreciate the decor, the friendly welcome from the waiters and waitresses and the atmosphere in general. This institution in the heart of the Saint-Germain-des-Prés district reminds them of their social success, their young years as students at the Sorbonne, their romantic dates with no future. In short, their best years, ever!

Tonight it’s William’s birthday. Tonight it’s a general round for the occasion! When the young woman approaches the table to take their order, he is under the spell. Weird, he had never noticed her before. Her eyes … Yes, it’s in her eyes. Deep black, an intense black worthy of the seabed, when all light is gone. Well, what he imagines anyway. He forgets to talk. His friends kindly laugh at him. They take over for their speechless friend.

Recovering soon afterwards, William follows up with a joke or two to make himself look good, or at least funny. They’re not having their first drink anyway. Drunkenness has replaced sobriety. And every word, every sentence, even the most innocuous, triggers general hilarity. They even make a lot of noise. The boss must have asked them to tone it down. The standing of the customers imposes a minimum of behavior. They just kinda forgot about it. It’s not the final of the World cup football every night!

It’s getting late, the more reasonable ones have already gone to bed. The next day they have a tennis match. As for the most enlightened, they keep up. William, meanwhile, stared at the waitress throughout the evening. He even saw her blush once or twice. It is not in his habits, however, but he just can’t help it.

The Lipp brewery will soon close its doors. William asks for the bill. And as he meets her gaze, he is the one who blushes this time. As he crosses the threshold, he runs back inside just to ask for her name. It’s Sybil.

We take each other’s hand