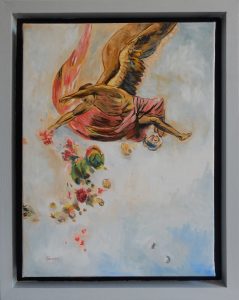 Have you heard about Daedalus? Of course you have. In some point, once or twice during your life.

It’s this architect who built the Labyrinth for the Minotaur in Crete and showed Ariane how Theseus could get out. Coming to his knowledge that the Athenians had found a way to escape, King Minos was immediately convinced that they couldn’t have succeeded without the help of Daedalus. So, he put the architect and his son in this labyrinth, making an evidence the infallibility of this plan since without indication, even its author can’t find his way out. However, they had two options to escape : by the air and the sky. So, Daedalus made two pairs of wings fixed with wax on his shoulders and of his son’s. Just before taking off, Daedalus makes one last recommendation to Icarus. Not getting too close to the sun because the wax could melt and thus the wings come off and then the fall would inevitably be fatal.

The two men fly away and leave Crete lightly and without difficulty. Icarus is awed by the sky and its delights. He flies freely among the clouds and the different shades of blue and grey. Fascinated, he rises higher and higher, closer to the danger. His father, scared and advised, orders him to come down at once. He can’t join him for fear of crossing the line. This invisible line that would lead him straight to death. He starts screaming, emptying his lungs. Almost voiceless, Daedalus carries on while approaching the imaginary border. The heat is intensifying. He has no other choice but to give up.

Icarus, completely deaf, unaware of his father’s distress, continues his exploration. He just doesn’t realize anything. He sails like an expert bird of prey. He feels neither the warmth nor the progressive detachment of his new members. Drunk and deprived of oxygen, Icarus doesn’t notice the real loss of altitude.

Suddenly, as he tries a change in direction, his two wings come off at once. He thinks he can catch up with the flowers that accompany him in his fall, but nothing is happening. He passes Daedalus at lightening speed, waves and then hits the ground.