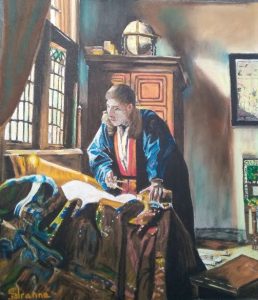 Peter is both excited and anxious. He must board tomorrow at dawn aboard an giant sailboat towards the New World. His role ? Make the most accurate topographical surveys as possible.

This is the first time he goes so far away for the needs of his job. Since childhood, he loves drawing maps and reliefs. Collecting stones, earth and depending on where he was, colors and textures were different. In his room, he stored hundreds of little boxes filled with his treasures. His mother never wanted to upset him and was always on his side when his father threatened to throw everything into the pond.

When he became an adult, his passion only increased. He took the appropriate studies and wished to teach. At the same time, he proposed here and there studies to anyone interested. One by one, word of mouth, his reputation grew and he was now much required.

In this context, he is asked to do this rather special investigation work across the Atlantic. He is seasick but he will deal with it. No way to make himself ridiculous. The storm is announced for the next night. No way to show his fear. He goes on deck with the crew and helps with maneuvers. His superhuman efforts bore fruits. The next day he is admitted to the officers’ table. Intrigued by his skills, they ask him a whole lot of questions to which he deliberately chooses to answer the simpliest way of the world. No way to appear too scholar, he would only gather irony and jealousy.

The land is now visible, just a few more hours, enough for the collecting of all his devices and documentation books. He is on board in a small boat with the captain and finds himself the second man to put a foot in the unknown ground, or so. His excitement is at its height, he is shaking. Hard to hide his growing enthusiasm in front of men seasoned with any novelty. His stuttering betrays him and soon, his new buddies openly mock him. Hopefully, the first mate defends him and stops all unnecessary agitation instantly. Suddenly a fossil …