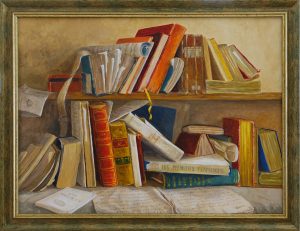 Mrs Peacock is late. She was trapped in the usual Saturday night’s traffic jams around Paris. She has to go to the Colonel Mustard’s property in the depths of Essonne. It’s a ritual. A meeting of former criminology students held annually on the anniversary date of graduation.

She finally rings at her host’s door and is greeted by the butler. She missed the drinks. Damn, it’s always been her favorite moment. So, she joins her friends in the dining room. Colonel Mustard, Professor Plum and Reverend Green are here. But, no sign of Miss Scarlett. More curious than worried, she questions these gentlemen about the absence of the pretty and fearless ex-student. The three men stared at each other, surprised to have missed that fact. Yet she arrived first, then, well, she went to the bathroom, then, well obviously she didn’t come back.

The four friends start to look for her. By the way, how many rooms are there in this house? Considering that there are two floors, because of … Oh well, that’s enough. Mrs Peacock is already literally dried. If only she had waited for a drink before … Oops, where are they? Damn, she got lost. She tries, but in vain, to find her way back. A door on her right, she opens it without further delay. She is in the library. God it’s beautiful. Since coming in that house she has never been there. She ventures among the rays and at the corner of an alley, she screams.

In the next few minutes, Colonel Mustard, Professor Plum and Reverend Green stand by Mrs. Peacock. The four friends stare in horror at the dead body bathed in a pool of blood of Miss Scarlett, a candlestick, next to her, blood-stained too.

Panic seizes Mrs Peacock, she must call 911. As she rushes to the door, a strong and determined arm holds her in extremis. Colonel Mustard doesn’t want her to call anyone, obviously. She is puzzled. Is she the only one? She’s wandering, while joining …

Who killed Miss Scarlett with a candlestick in the library?