What is it exactly ? 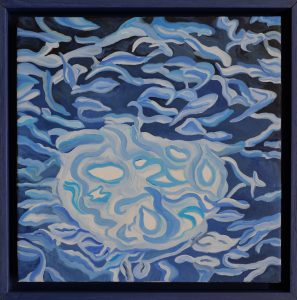 What if we were at the far end of the oceans? Where light is scarce. Where thousands of species, programmed to kill each other to survive, swarm. Where the human species can hardly join a free and carefree nature. Where the destruction of the seabed gradually nibbles on the reefs. Where pollution in all its forms furiously invades space. Where living becomes complicated. Where hope remains in the end. Where when they escape the nets, they have fun all day. Where we could call them smelt!

What if we were in the cosmos? Where the planets, the solar system, the beyond too, why not, meet each other! Where the mysteries are whole. Where science has its own laws, its own limits. Where scientific research is perpetual. Where celestial beauty blows us away and intoxicates us. Where the universe exceeds and surpasses us. Where the explanations are infinitely incomplete and complex. Where in the end the possibilities are extreme and invisible. Where everything is only accessible with knowledge and confidence. Where we could call them parallel worlds!

What if we were inside a human body? Where cells circulate freely in a sometimes hostile environment. Where life can start if it chooses to do so, if the intention is intense enough, if the incarnation is possible. Where sickness rumbles slyly. Where healing takes place permanently or not. Where the eternal cycle, all of a sudden a morning in March, triggers birth. Where tissues multiply, mingle, divide. Where genes are unique and tell who we are. Where we could call them humans!

What if we were in the spiritual? Where the light is intense and bright. Where the soul meets its scattered disciples. Where life is more alive than ever. Where the infinite has no limits. Where communication comes instinctively, unconsciously, consciously. Where the mind loves freedom. Where borders no longer exist. Where it all began. Where Creation has become real. Where everything will end too. Where we all want to go for a walk, one day. Where we could call them lucky liberated ones!

The bay of Cannes