All the better to eat you with, my child 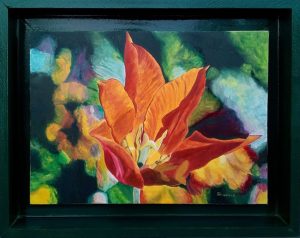 Jean-Luc doesn’t like stories. He hates this so-called privileged moment with his father when he reads a story to him. And during the weekends, it’s even worst, because as there is more time, it is his mother’s turn but with a fairy tale. And it has become unbearable.

One evening, as Jean-Luc enters his eighth year, he decides to put an end to this masquerade that has being going on for too long. He waits for Saturday night because surely it will be easier with his mother. Actually he is a bit scared of his father. So, well settled in his bed, he announces that this time he will be the master of ceremony. He takes a few sheets of white paper, his favorite colored pencils and begins his story.

« Once upon a time there was a rainforest, where it was always hot, and always raining so much, and a little boy who was about to visit his old violent and alcoholic uncle. The young child doesn’t feel releaved but his parents both very, very sick and stuck in bed, have no other option. He takes a bottle of alcohol in a bag and walks deep into the forest. To keep himself company and especially to keep his spirit up, he sings his head off. Anything, he doesn’t give a damn. On his way he meets an old, very old woman, warts all over her face and hands. At first he is terrified, so he walks faster but she always manages to follow him. Resigned, he stops, turns around and faces her. Surprised but delighted by so much guts, she decides to give him something. She hands him a flower, a tulip fully orange, blazing but warns him about its power. Delighted to have a weapon for his afternoon visit, he warmly thanks the witch and continues his journey.

When the boy is in front of the closed door, he hesitates. But too late, the uncle, already drunk, stands right in front of him, his arms wide open. Avoiding the inevitable embrace, he hands him the bottle of alcohol hoping to get rid of him. In vain. So, he waves, like a weapon, the tulip before the old man’s eyes who approaches too closely and disappears entirely in the tulip’s heart. »