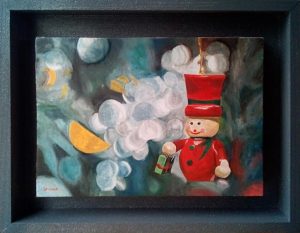 Like every year, Peter, the red soldier, finds himself stuck there for the whole month of December.

But he’s not just a soldier. Not at all. Pierre has a real responsibility. In fact, he is incharge of keeping a good atmosphere in this overcrowded area. The decorated baubles are not allowed to attack the single color baubles. By claiming they are more sparkling, richer, it’s the same story over and over again, they are snarling and aggressive. So Peter has to lecture them.

With his 70s briefcase, the red soldier begins with the precise inventory of all the subjects prisonersof the green branches. A task far from easy. He still hasn’t identified the person, man or woman, who hangs all this little world early that month but frankly, why mixing up everyone and risking stirring things up? He must show extreme psychology and empathy. And you know what ? The most rebellious ones are the small wooden subjects. Probably because they come straight from the Netherlands? You know the difference of culture? In any case, they think they are above rules.

Peter has a lover: the glittering fairy. It has been two years since she lost an arm. Such a stupid accident. At the end of the month, the branches having dried more than usual, she wasn’t careful enough and she just slipped. Fortunately, the two tomcats of the house were sleeping and saw notinhg. Well, it’s the arm that held the magic wand. The one which allowed to settle any conflict like a blink of an eye. She feels so sorry. Since then, they have become close friends to the the career military’s delight. Well yes, this term can be used even if it is, annually, a one month career.

On the other hand, he particularly hates the glittering white boas shoking, at least, half of the crew. Frankly, it doesn’t make any sense to him. But no need to fight. Therefore he has to convince the reluctants who like goldfish forget the rules of the game from year to year. Peter is also part of those people. So, it is his duty to reinvent the wheel annually. Which makes things a little bit more interesting.

But hush, the star is watching.

All the better to eat you with, my child